The Institute of Biomechanics (IBV) and the Textile Technology Institute (AITEX) have collaborated for the last two years on the INSTINTO research project to develop a system using wearable sensors in clothing, linked to an ICT platform to monitor the elderly wearer and prevent falls from occurring or protect the wearer in the case of a fall. 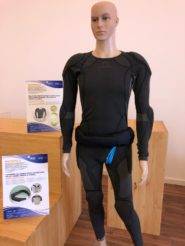 Integrating wearable sensors into clothing allows the wearer to be monitored constantly, providing data on a range of functional parameters: step, balance, muscle strength, etc., and carry out real-time evaluation of the wearer’s physical wellbeing.

The system comprises a series of wearable electronic devices which collect biometric data, the communication software between the system and the web platform and page to allow both the wearer and clinical staff to access the data in real time.

The data provided by the sensors are accessible to clinical staff via the web page. The system will also be able to identify if the wearer is at risk of suffering a fall, which is vitally important for the clinical staff as it will enable the design and planning of a preventative response.

The results of the trials have demonstrated the validity of INSTINTO in the prediction of falls and the prototype achieved a predictive performance of between 70 and 75%.

Furthermore, the wearable sensor is capable of an extremely high degree of accuracy in real-time fall detection.
The system developed by INSTINTO integrates wearable sensors into textile articles such as t-shirts, trousers and belts capable of recording biometric data of the elderly wearer and detect if they are in an at-risk situation of suffering a fall.

When an elderly person has a fall the long-term effect is often a loss of Independence which in turn reduces their quality of life and social integration. This contributes considerably to higher mortality rates. One in three elderly people suffer a fall at least once a year, and this increases for the over-80’s and is one of the main factors affecting the elderly and the second most prevalent cause of accidental death around the world.

Falls affect approximately 16.5% of the elderly population in Spain, and the psychological and social consequences of receiving assistance and feeling afraid and insecure affect between 44% and 64 %; in addition, between 9.7% and 19% of falls end up with a stay in hospital.

The Biomechanics Institute (IBV) is a leader in developing innovative technological solutions aimed at the sociological and healthcare management of frailty in Europe using biomechanical monitoring applications to evaluate the need for primary and specialised assistance.

INSTINTO is an excellent example of this work, and one which seeks to develop new technological solutions to minimise the consequences of an elderly person taking a fall.

The project aims to place the Autonomous Region of Valencia firmly at the forefront of products and services to improve frailty risk management to help prevent falls among the elderly.

AITEX receives the Impulso 2022 Award for its...

Find out our new R+D lines of investigation

COSMETEC: RESEARCH INTO NATURAL SOLUTIONS FOR THE REPLACEMENT...