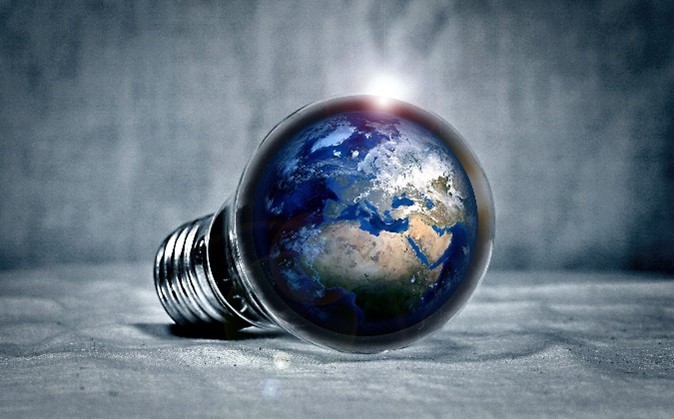 Textile, Footwear and Leather are Mediterranean traditional sectors, with an annual estimated global turnover of more than €280 billion and 2.7 million employees working mainly in MSMEs which account for 90% of the industry. During the last decades, these sectors have been affected by the economic slowdown and a very strong competition from Asia. These Mediterranean traditional sectors are under threat if they do not quickly renew their business models. Unable to compete in price or volume, the main challenges for them are product and process innovation, the establishment of new business models and the creation of business sustainable alliances to strengthen the value chains.

CRE@CTIVE will address these challenges. In particular, the project is aimed at boosting creativity as a key aspect for increasing economic opportunities of the MSMEs by creating links between the traditional sectors and the creative industries (crafts, design, culture, etc). As a result, creative innovation will upgrade the products and will improve their positioning, making them more competitive in the global markets.

To foster value chains and business alliances among MSMEs in Mediterranean textile, footwear and leather sectors in order to encourage the creation of new products and business growth, by building bridges between these sectors and the creative industry.

What will be improved?

CRE@CTIVE will strengthen transnational innovation networks, clusters and value chains. It will create new jobs, drive efficient resource use and accelerate the process of generating, diffusing and applying innovative ideas, concepts and business models. Tangible solutions for target groups will be provided, in particular for young people and women, but also for the society at large. Concretely, thanks to CRE@CTIVE, 16 new business alliances will be supported directly to establish new market opportunities; and, at least 24 new direct long-term jobs will be created through direct participation in the project pilot start-ups, via sub-grants that will give the opportunity to set up new businesses based on innovative approaches.

The project will widely involve the public authorities and decision makers in the activities to ensure a deep impact on policies. Besides, the participation of several relevant public authorities in the Partnership will ensure that the results and actions of CRE@CTIVE are compatible with the latest and upcoming policy development. After the project life, public authorities will be able to consider the links created by the project between the traditional sectors and the creative industries as a must-have criterion for their regional or national financial support schemes. CRE@CTIVE is a unique chance to put creativity at the heart of policymaking in the three traditional sectors.

CRE@CTIVE, a tool for the recovery and restructuring of the economy of the traditional sectors in Spain, after coronavirus effects 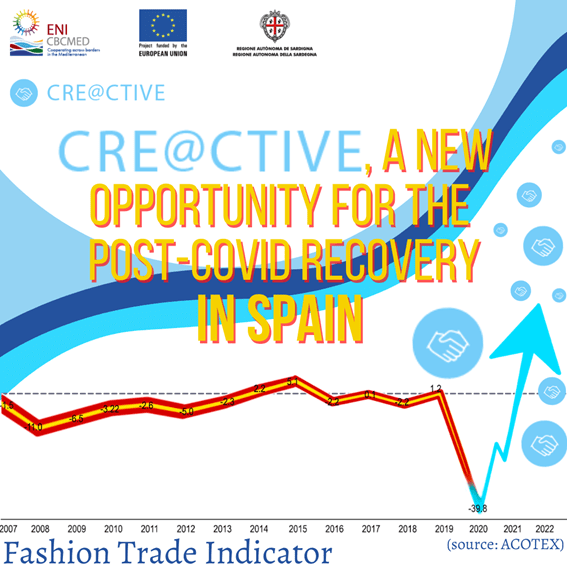 The fashion sector represents an economic and social pillar of Spain. The companies in the sector are a fundamental economic driver, generating 2.8% of the national GDP, or what is equivalent to generating 6B€ euros in taxes: 3.7B€ in VAT, 2B€ in social security contributions, and 330M€ in corporation tax. The entire value chain contributes to generate this level of activity by creating 4.1% to the labor market: from the production of raw materials (yarns, textiles, leather) and clothing to the marketing of garments or footwear, through other agents linked as logistics or intermediaries, which depend to a large extent on the activity generated by the fashion sector. In addition, their relevance transcends our borders: they account for 9% of exports (although the balance of trade is negative since imports are greater than exports) and attract 13% of world shopping tourism.

These sectors not only contribute at an economic level but also serve as a tool to face various social challenges.

In the last year, these sectors have been affected by the current situation, where the COVID pandemic has hit many of the countries hard, unbalancing the systems established so far and causing the trends established up to that point to be suddenly broken. In general, the COVID harmed these sectors, which, added to the crisis of 2008, has caused these sectors to be far from the magnitudes before that recession. As a result, the profitability of the sector has been significantly undermined over the past 14 years. In general, production and sales have fallen in the last year, but, in the case of the textile manufacturing industries, in July of last year, they had an increase in their production and turnovers, recovering without reaching the values of the previous year. The effect of the crisis was immediate, with store or business closures (a decrease in the number of companies of 2.1% compared to 2019) and employees temporarily or structurally outside the labor market. The number of workers has declined by 6.6% since before the pandemic.

The Spanish Government has adopted measures to try to alleviate the adverse effects, but the study has shown that they are not enough, highlighting the need to create new business models, to cope with the imminent changes in demands and consumption habits. In addition, the promotion of companies’ innovation activities should be optimized since only 17% of textile companies bet on innovative activities, spending only 1% of their sales on R&D investments. In this area, the project CRE@CTIVE aims to serve as a tool for the boosting of these companies, serving as support for the creation of a new business model together with an outstanding value proposition.

Consultancy company needed for the ENI CBC MED CRE@CTIVE project to support the financial and administrative control and monitoring of the project for 7 project partners.

For more information, please fill in the form below.

Would you like more information about this projecte? Fill in the following form.

The kick off meeting of the European project “CRE@CTIVE: Innovation to encourage creativity in the traditional sectors of the Mediterranean” was hold on 4th of March.

Due to current conditions, it had to be carried out virtually, but this did not prevent a total of 54 participants, in addition to the people who were able to follow streaming video on the project’s Facebook channel. Aitex was the host of the event, as the beneficiary leader of the project. Most of the participants belonged to public institutions, with representatives from different relevant institutions of the Valencian Region because the CRE@CTIVE project is the only project within the call for strategic projects of the Mediterranean Neighborhood and Cross-Border Cooperation Instrument program (ENI CBC Med) which is led by an entity of the Valencian Community in the priority of SMEs and business development. Institutional, commercial, and business entities from the other countries involved in this project were invited: Egypt, Italy, Jordan, Palestine and Tunisia.

The first speaker at this meeting was the Director of External Relations of the Valencian Institute of Business Competence, Mr. Jordi Sebastià i Talavera. He was succeeded by Mrs. Mª del Carmen Hernández Martín, who holds the position of General Director of Management of the European Regional Development Fund on behalf of the Ministry of Finance, and Mrs. Daría Terrádez Salom, general director of relations with the European Union and the State representing the Presidency of the Generalitat Valenciana.

On the 21st of December the CRE@CTIVE Project (“Innovation for bringing creativity to activate traditional sectors in Mediterranean area”) was kicked off by the lead partner The Textile Research Institute (AITEX) from Spain, and project partners from Italy, Spain, Tunisia, Palestine, Jordan and Egypt.

ENI CBC MED CRE@CTIVE project is an EU funded project with a total budget of 3.2 million Euros. It aims at activating traditional Mediterranean industry sectors by boosting CREATIVITY as a key for increasing economic opportunities for MSMEs. Design talents from international organizations, creative hubs, fashion schools, design centres will be linked with MSMEs fostering a creativity and innovation process with impacts on value chains and business alliances across the Mediterranean.

Due to the COVID-19 restrictions, the internal kick-off had to be held online. At the start all partners introduced their institutions, the project team and the role they will play within the project. The lead partner introduced in detail the project with its different work packages and outputs and gave an introduction to the management procedures and financial management guidelines for all partners. CEEBA, the Confederation of Egyptian European Business Associations introduced the communication plan outline.

The official institutional meeting and press conference of CRE@CTIVE will be held in March. 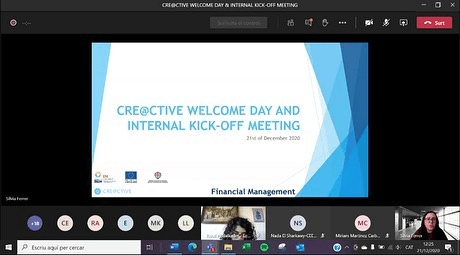 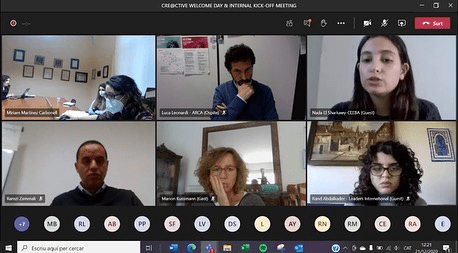 “This information has been produced with the financial assistance of the European Union under the ENI CBC Mediterranean Sea Basin Programme. The contents are the sole responsibility of AITEX and can under no circumstances be regarded as reflecting the position of the European Union or the Programme management structures”

Would you like more information about the project? Fill in the following form.