AITEX is an Approved Body for the “Instrumented Thermal Manikin” test

AITEX is an Approved Body for the “Instrumented Thermal Manikin” test

A wide variety of personal protective equipment (PPE) is available to protect the wearer against injury by heat and flame. This PPE can be made from different materials depending on the intended use. Several tests are approved for the evaluation of materials or combinations of materials and components used in the manufacture of PPE against heat and flame hazards; behaviour against convective, radiant and contact heat etc. Unlike these, the “Instrumented Thermal Manikin” or “Thermo-Tex” test evaluates the complete PPE, giving a much broader picture of the behaviour of the PPE against a risk in a way similar to what a user could face in real life. 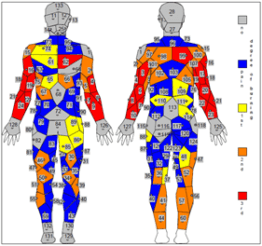 The test enables us to evaluate the performance of the entire garment, analysing the influence of all possible accessories such as closure systems, pockets, reflective tapes, embroidery, logos, etc. Prior to the test of the complete garment, the flame propagation of the constituent materials has to be evaluated. Next, the Thermo-tex test is performed, where the rate of energy transferred through the material when exposed to a flash fire (a high intensity flame that spreads rapidly due to the ignition in the air of a diffuse fuel, such as flammable dust, gas or vapour), is evaluated.

This type of hazard can occur in various industries such as the chemical or petrochemical industry, refineries and foundries, etc. and in the typical daily work of firefighters, forestry agents, the military, pilots, etc. In these situations, the use of fire-resistant clothing not only minimises potential burn injuries, but also allows users additional time to escape from potential danger. The test is carried out on garments made with a standard coverall, or with the PPE depending on the product. Garments or sets of garments can be made up, on which more complex tests can be carried out to simulate risk situations as realistically as possible. In order to evaluate the performance of PPE against flash fire, AITEX is approved for the Thermo-tex test, in compliance with international standard ISO 13506-1:2017 and the American ASTM F1930:2018.

These tests enable the Institute to quantify the thermal protection provided by PPE based on the measurement of heat transfer through the garment on a mannequin, after exposure to a flame with a heat flux of 84 kW/m2, lasting between 3 to 8 seconds, depending on the end use of the garment. The dummy is constructed of flame-resistant and thermally stable ceramic and glass-fibre reinforced resins, which do not influence the combustion process. The manikin is upright and has the shape and size of an adult male. 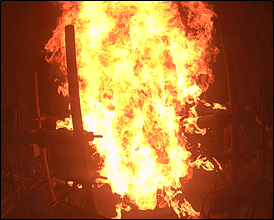 According to the test standards, at least 100 heat flux sensors must be distributed over its entire surface to obtain sufficient thermal information from the garment, but at AITEX, the Thermo-tex equipment has 124 and can incorporate a further four in the ankles and four in the hands for additional data. The sensors measure heat transfer through the garment during and after exposure to the flare.

The dummy is surrounded by twelve propane burners, which provide the flare with a uniform and stable heat flow during the time required for the test. The whole assembly integrates a data acquisition system that transmits the temperature measurements recorded by the thermal sensors to the software, which calculates the percentage prediction of burns produced as a result of exposure to the flame and the value of the energy transmitted through the garment.

The test identifies areas where pain may be experienced and first, second and third degree burns are likely, providing a percentage of the sum of second and third degree burns on the surface of the dummy, which are displayed as a map of the body in the areas where they have been produced. This information is vital for the manufacturer who can use it to determine which areas to reinforce when designing the PPE, to reduce possible injury to the user.